The next time you drive past one of those road signs with a digital readout showing how fast you’re going, don’t simply assume it’s there to remind you not to speed. It may actually be capturing your license plate data.

According to recently released US federal contracting data, the Drug Enforcement Administration will be expanding the footprint of its nationwide surveillance network with the purchase of “multiple” trailer-mounted speed displays “to be retrofitted as mobile LPR [License Plate Reader] platforms.” The DEA is buying them from RU2 Systems Inc., a private Mesa, Arizona company. How much it’s spending on the signs has been redacted…

Continued: That sign telling you how fast you’re driving may be spying on you

The Transportation Security Administration (TSA) has begun collecting information on travelers through a program that monitors citizens not on a terror watch list or suspected of a crime, The Boston Globe reported.

Undercover air marshals reportedly document passengers’ behavior, including whether they use technology when traveling, whether they change clothes at the airport, how closely they stand to the boarding area and other patterns…

‘Americans nearly universally speed, and excess speed is a factor in many #accidents. But what if higher speed limits made roads safer?

“We all #speed, yet months and months usually pass between us seeing a crash,” Lt. Megge tells us when we call to discuss #speedlimits. “That tells me that most of us are adequate, safe, reasonable #drivers. #Speeding and #traffic #safety have a small correlation”.’

How many other TSA assaults, gropings and other indignities never make the news, because they’ve become routine in the police state known as the American airport?

Wouldn’t many security systems be better than the TSA monopoly?

Continue reading: Should TSA suffer the death penalty for its crimes?

“Recalls of cars with the faulty Japanese airbags affect one in eight vehicles nationwide, a report from Kelley Blue Book found. The recall thus far has affected some 32 million vehicles from dozens of car brands, including major players Toyota, Honda, Nissan, General Motors, Mitsubishi and Ford, the report found. Yet very few people in the U.S. are aware their vehicle could be involved in the recall…” 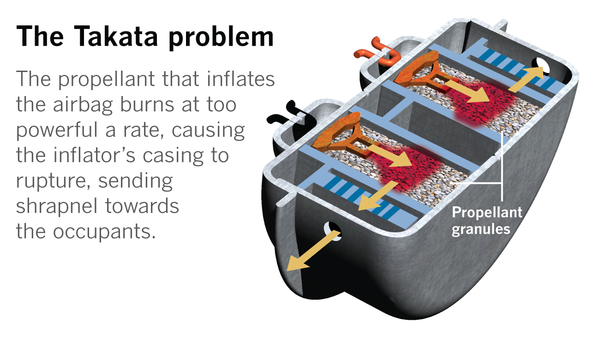 Last week, when a new mother went into labor, she decided to cut some costs and precious time by hailing an Uber ride to the hospital, rather than an ambulance…

Continue reading: Mom in Labor Calls Uber Instead of Ambulance. Why…?

“It’s a simple bot that helps with court appeals — but could it replace the need for human lawyers?”

“Since launching in late 2015, it has successfully appealed $3 million worth of tickets.”

Continue reading: A 19-year-old made a free robot lawyer that has appealed $3 million in parking tickets

“Oklahoma police can outright seize everything you have from debit cards to bank accounts on a traffic stop without any criminal charges being filed. If some policeman thinks you’re doing something illegal, your life is over. Without money, you cannot hire a lawyer and they can just rob everything you have on a whim…”

Story: Oklahoma Police Can Seize Your Entire Bank Account on a Traffic Stop Without Any Charges

Baltimore police and transportation officials are trying to correct a problem with about 2,000 red light camera citations that may bear the signature of a police officer who is dead.

The problem concerns the sworn statement that appears on the citations confirming a police officer has reviewed the camera images to verify a violation has occurred.

On the citations in question, that signature belongs to Baltimore Officer James Fowler, who was killed in a car accident in Pennsylvania on Sept. 27, I-Team lead investigative reporter Jayne Miller said.

The I-Team was shown one citation that cited the driver of a van for running a red light in the middle of the day in northeast Baltimore. The date of the violation was Jan. 12, 2011.

A retired city officer who didn’t want to be identified told 11 News he’s an acquaintance of the driver who got the violation. He said he recognized Fowler’s name, who he worked with before he retired, and realized Fowler couldn’t have been the one to review the ticket.

A city police representative blamed the problem on a computer glitch, which is the fault of the company that operates the camera system, and he said the problem has been rectified. Letters are being sent to people who got the violation notice.

The Police Department said it does not blanket approve citations, and only the violators got the erroneous copies. A department representative said internal copies show the name of the officer who actually reviewed the violations.

Legal experts said any citations issued after that date bearing Fowlers signature may be difficult to enforce.

The city’s red light cameras are a reliable revenue source. In January alone, about 9,300 red light citations were mailed to drivers trying to beat the lights, Miller reported.

The citations cost violators about $75.